Vicky Kaushal seems to believe in the adage, “All work and no play makes Jack a dull boy.” We say that because the actor took his time to schedule a cricket game or two amid the hectic shooting schedule of his upcoming film enjoy. Vicky Kaushal is currently filming in Indore for the film he will be starring in with Sara Ali Khan. The actor used most of the time between takes to play cricket with his team. In a video shared on social media, Vicky Kaushal can be seen fighting on the field. In a note in the video on Instagram Stories, he said, “Team that plays together kills together.” 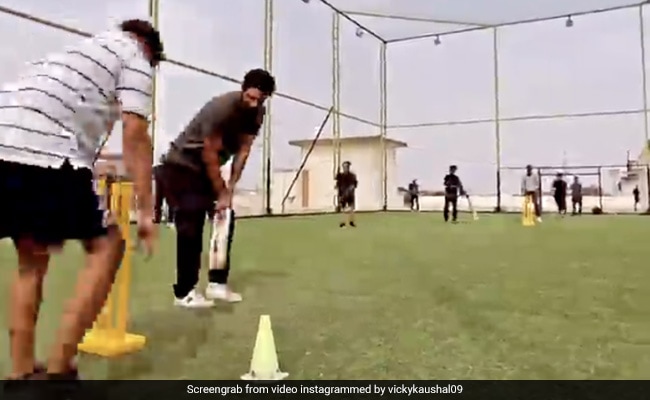 This isn’t the first time Vicky Kaushal has played a game of cricket while filming the film. He recently shared another video on Instagram Stories where he can be seen hitting the ball and running between the wickets. Along with the video, Vicky Kaushal wrote, “Nothing beats making time on set for a bit of cricket.”

Fans also shared videos of him playing cricket while filming for the film at Indore Christian College. Here’s a video posted by a fansite:

Vicky Kaushal and Sara Ali Khan’s untitled film is directed by Laxman Utekar. Actor Sharib Hashmi, who will also star in the film, shared a photo with the entire cast and crew and wrote a heartfelt message. In the note he said: “I created fond memories on the sets of this beautiful (but untitled) film with a dream crew produced by the amazing Maddock Films and Pooja Vijan.” He added: “Director Saab, Laxman Utekar, sir matlab aapne dil jeet liya ekdum i (You won my heart). Raghav Ramadoss, My brother you’re a sweetheart.”

He also said, “Thank you to everyone and the entire crew of this film for making this journey so smooth and memorable.”

In addition to this film, Vicky Kaushal will also be shown Sam Bahadur, the highly anticipated film directed by Meghna Gulzar. He also plays the lead-in Govinda Mera Naam opposite actresses Kiara Advani and Bhumi Pednekar. The film is produced by Karan Johar’s Dharma Productions and directed by Shashank Khaitan. Vicky Kaushal takes a bath in the cool waters of the...

What did Katrina Kaif write after she went to Priyanka Chopra’s...

Video: Vicky Kaushal took a dip of faith in the Ganges,...