Kyiv woke up to a 36-hour military curfew – enforced by shoot-at-sight orders – to prepare for a halted Russian push on the Ukrainian capital on Monday. 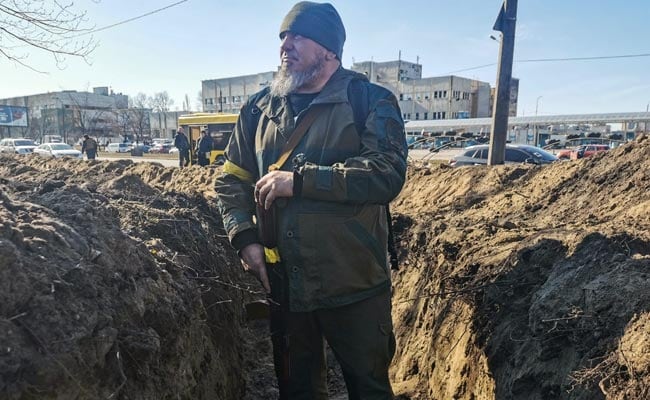 The bravado on Kyiv’s increasingly narrow streets is mixed with expressions of exhaustion and dread.

The young Ukrainian filmmaker stood atop the ditch with a rifle while his friends prepared a Molotov cocktail. Kyiv’s weary but defiant residents are digging for war.

Three volunteer fighters dressed in olives sweat just a few steps away, placing a piece of artillery on a patch of grass separating the two lanes of a large city street.

Electronic billboards around them carried messages warning attacking Russian troops that “instead of flowers, you will be greeted with bullets”.

Filmmaker Andrey Ivanyuk took this with the conviction of a man who had not yet experienced real war, and said that the Russians were about to be taught a lesson they would never forget.

“The Russians know very well that our land is burning under their feet,” said Ivanyuk.

Kyiv woke up to a 36-hour military curfew – enforced by shoot-at-sight orders – to prepare for a halted Russian push on the Ukrainian capital on Monday.

The battle-hardened soldiers of the Western-backed government are stretched to the limit on the front.

They are fighting Russia’s armed forces near the Belarusian border in the north and Crimea linked to the Kremlin in the south.

‘Flowers for his grave’

But Kyiv’s historic city is now being defended by its residents – from artists like Ivanyuk to bank employee Viktor Rudnichenko.

Both are in their 30s and full of smiles.

Both were living normal lives until Russia shocked the world and attacked Ukraine last Thursday.

And both are full of confidence.

“They can get from us the only flowers that will be for their graves.”

But Kyiv’s increasingly narrow streets mix bravery with expressions of exhaustion and dread.

Groups of people were loading their suitcases at the train station moments after the curfew was lifted.

There were rumors that the city had organized two more evacuation trains.

Officials could not say how many of Kyiv’s original 3 million residents had already fled.

But a large proportion of those who stood for hours in queues outside shops and kiosks in the city in search of bread and cigarettes.

The city itself is slowly falling into the trap of a conflict zone.

Waves of Grad missiles and mortar fire fell mostly silent during a meeting between delegations from Moscow and Kyiv for talks on the Belarus-Ukrainian border on the fifth day of the war.

But it only gave Kyiv’s volunteer forces more time to roll out everything from furniture and tires to trash cans, and to fortify the checkpoints that divide the city into zones.

“Don’t go on the grass,” volunteer Oleksiy Vasilenko shouted at a passerby as an air raid siren disturbed the still air.

“There could be explosives! We heard the Russians are hiding mines in the grass,” warned the 27-year-old.

The air in Kyiv has been poisoned for days with suspicions that secret Russian units are already hiding in the capital and carrying out attacks.

The city on Monday issued notices to drivers using Kyiv-registered phone numbers not to use the bus lane on the right hand side of the road.

“If you drive in the bus lane you will be a saboteur and will be dealt with accordingly,” the city’s message warned.

The checkpoints are filled with nervous and sometimes angry people who point at their Kalashnikovs at the cars and demand identity cards.

The pass code for the easy passage is “Slavic Ukrainian” (Glory of Ukraine) – the national salute was deeply despised in the Kremlin and traditionally followed with the response: “Geroyem Slav” (Glory to Heroes).

The day’s new shift of volunteers settled in the trenches were milling under a clear blue sky and exchanging salutes frequently while preparing battle plans.

“There are enough people here to protest,” said the veterinarian Yuri Gibalyuk,

Why Ukraine has so far been able to hold Russian troops:...