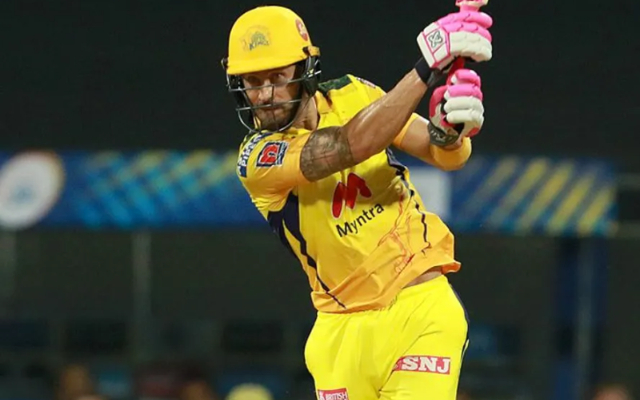 Faf du Plessis was earlier part of the CSK franchise.

Faf Du Plessis Has been named as the new captain of Royal Challengers Bangalore for the upcoming IPL 2022. The decision was taken on March 12, that is, just two weeks before the start of the 15th edition of the marquee tournament. The former South Africa captain will replace Virat Kohli, who led the franchise for nine seasons.

While congratulatory messages poured in for Faf from all corners including his predecessor Kohli, he also received a surprise wish from his former franchise i.e. defending champions Chennai Super Kings, of which he was a part while winning two titles in the 2018 and 2021 editions respectively.

CSK have a special message for Faf du Plessis

After Faf du Plessis was named the new captain of RCB, Chennai Super Kings penned a lovely message for South Africa, who were one of their exceptional performers till last season. On social media, the defending champions posted a picture of Virat Kohli wishing his successor on a video posted by RCB.

Nonetheless, the four-time champion brought to the fore his unparalleled creative skills as he placed the video on a projector and displayed it in front of a few spectators, giving it a theatrical feel. The picture was captioned, “Stay wonderful forever! Sending everyone #Yellove.

Du Plessis starred with the bat for the Yellow Army in the 2021 edition as he finished the previous season as the second-highest run-scorer with 633 runs in 16 matches, surpassing that of his teammate and Orange Cap winner. Just two runs short of Ruturaj Gaikwad. Finished with 635 runs in his tally.

Unfortunately, he was not in CSK’s plan despite his outstanding performance for 22 yards and was released on November 30, 2021. The batting sensation was then roped in by the three-time finalist. IPL 2022 Mega auction worth Rs 7 crore. Apart from Faf, RCB also had the option of appointing veteran wicketkeeper-batsman Dinesh Karthik as their next captain.

Karthik led Kolkata Knight Riders in the 2018 and 2019 seasons and half of 2020 before being replaced by England’s 2019 World Cup-winning captain Eoin Morgan.