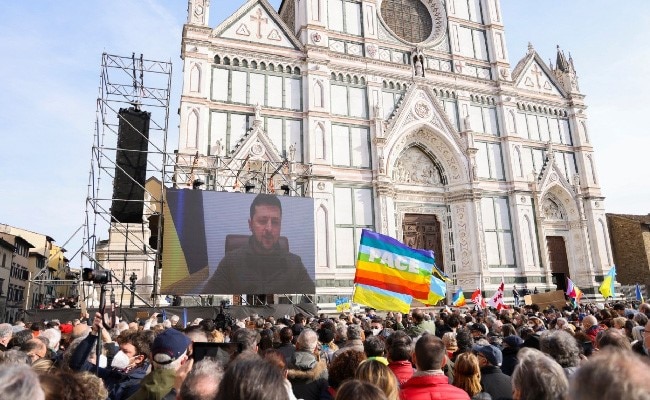 Crowds waved blue and yellow flags in Piazza Santa Croce as church bells rang 17 times – one for each day since Russia invaded Ukraine, which Moscow called a “special operation”.

Thousands packed into one of Florence’s largest squares on Saturday to show their support for Ukraine and listen to a video speech by its President Volodymyr Zelensky.

Florence has been associated with Kyiv since the 1960s, when the Ukrainian capital sent aid to the Tuscan city to help it recover from devastating floods.

Crowds waved blue and yellow flags in Piazza Santa Croce as church bells rang 17 times – one for each day since Russia invaded Ukraine, which Moscow called a “special operation”.

Many Ukrainian women in the crowd wore flower crowns as a symbol of peace.

Born in Donetsk and now works for a law firm in Florence, Lesya Mykhailenko said, “The Russians are under a dictatorship and cannot understand why they want to destroy our cities and kill our children.” Returns.”

“I can’t hate them because our bonds go back centuries,” she said.

In a speech broadcast in dozens of European cities participating in a day of protests, Zelensky said 79 children have been killed in Ukraine since the start of the war and called for more sanctions against Moscow and no-fly zones. .

War of words over Ukraine at UN as nuclear fears grow

"sense of scale…": Amidst the war, the map highlights the heroism...