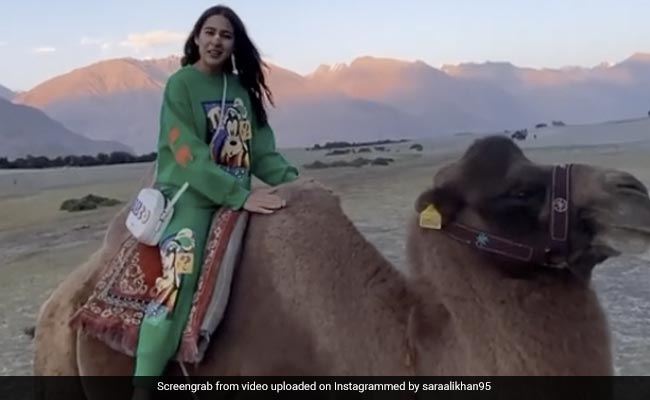 The ‘Kedarnath’ actor, who is followed by 39.5 million people on Instagram, posted a compilation of his journey across India. His iconic opening line ‘Namaste Darshano’ is widely liked by his followers.

Her caption read, “Namaste Darsno From hills to sea as beautiful as India can be”

The two-minute thirty-three second video begins with Sara sitting on a camel and reciting her famous poem, in which the ‘Love Aaj Kal’ actress rhymes random words and makes a funny sentence.

She shows clips of herself enjoying in a variety of landscapes, from Betab Valley to Pangong Lake. Sara also shared videos of her doing shikaras, motorboats and having fun with her friends on the beach.

Sara has been garnering rave reviews for her performance in the critically acclaimed film, ‘Atrangi Re’, which co-starred with National Award winners Dhanush and Akshay Kumar. She played the role of a schizophrenia girl, Rinku, who is forcibly married to Vishu (Dhanush), a medical student.

She will next be seen in ‘Gaslight’ which stars Vikrant Massey and Chitrangada Singh. Apart from this, she will also be seen in Laxman Utekar’s yet-to-be-titled film. Alia Bhatt and Ranbir Kapoor, MIA from this family-jam, were in...