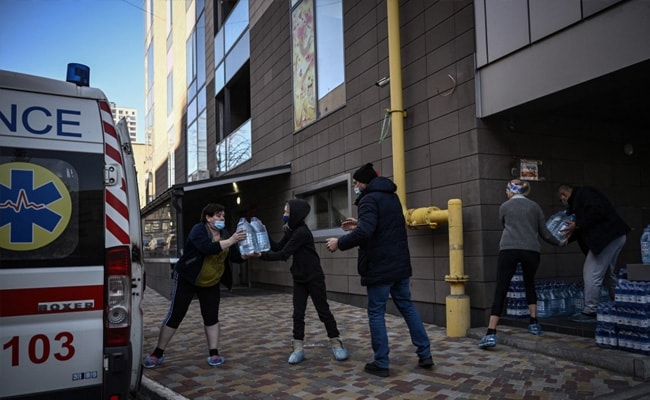 Ukraine War: According to a Kremlin readout of the call with Macron, Vladimir Putin insisted that a deal is possible only if Russia’s legitimate security interests are unconditionally taken into account.

Russian President Vladimir Putin on Monday set conditions for an end to Moscow’s offensive against Ukraine, as Russian forces opened fire on another city in the country in protest against Western sanctions.

Ukrainian officials said Russian attacks on Kharkiv killed at least 11 people. Kyiv says more than 350 civilians, including 14 children, have been killed since the invasion began on Thursday. The United Nations said more than half a million people have fled the country.

Russian and Ukrainian negotiators met for the first time on Monday when Moscow launched its full-scale offensive with Ukraine demanding an armistice and the withdrawal of Russian troops. The talks ended with both sides agreeing to continue with a second round of talks “soon”.

In a lengthy telephone call, Putin told French President Emmanuel Macron that Ukraine’s “demilitarization and demilitarization” and Western recognition of Russian sovereignty over the Crimean peninsula were prerequisites for ending the fighting in Ukraine, the Kremlin said. .

An AFP photographer in the city inspected damage from fighting on Sunday, discovering a destroyed school, as well as several burned Russian infantry vehicles.

Russian corpses disguised as military could also be seen on the streets.

Earlier on Monday, the Russian military urged Ukrainians to “freely” leave Kyiv on a highway ahead of a possible Russian offensive to capture the capital.

Long queues for groceries lined the streets of Kyiv on Monday after a strict 36-hour military curfew was lifted and volunteer militias learned to make homemade explosives.

“We will greet them with Molotov cocktails and bullets to the head,” bank employee Viktor Rudnichenko told AFP. “They can get from us the only flowers that will be for their graves.”

The Russian ruble fell to a record low as sanctions imposed by the West over the weekend had an immediate effect in Moscow, forcing the central bank to more than double its key interest rate to 20 percent.

“Ninety percent of Russians are going to withdraw their rubles and convert them into dollars, property or even gold,” predicted 51-year-old retired soldier Edward Sioyev, who lined up to withdraw cash from a Moscow bank. “It will be the common people who pay for this military bread-fight.”

As Russia becomes increasingly isolated on the world stage, it faced a critical test of support on Monday as 193 members of the United Nations General Assembly protested against Moscow’s “unprovoked armed aggression” in Ukraine. There was an extraordinary debate on the proposal.

During a rare emergency special session – just the 11th assembly in the 77-year history of the United Nations – Russia defended its decision to invade as a member state after the member state made a plea for peace.

“The fighting in Ukraine must stop,” UN Secretary-General Antonio Guterres warned after the session began with a minute’s silence for the victims.

“That’s it. Soldiers need to go back to their barracks. Leaders need to move towards peace. Civilians must be protected.”

Separately, the United States said it banned all US transactions with Russia’s central bank, while traditionally neutral Switzerland said it would adopt measures similar to those of the European Union.

The economic pain is intended to change Putin’s calculations, but about 100,000 Russian troops believed to be inside Ukraine continue to advance from positions north, east and south on Monday.

“Western sanctions on Russia are tough, but our country has the necessary capacity to compensate for the losses,” Kremlin spokesman Dmitry Peskov stressed.

Putin, who put his nuclear forces on alert on Sunday, banned foreign currency transfers outside Russia and ordered exporters to exchange their foreign reserves for the ruble to support the currency.

There were more signs of rare discontent on Monday among the usually ultra-loyal elites that surround the Russian leader – in addition to anti-war demonstrations, in which an estimated 2,100 people were arrested on Sunday.

Western defense officials and the Kyiv government say Ukrainian troops have so far kept the country’s major cities out of Russian hands, despite incursions into the capital and Kharkiv over the weekend.

However, Ukrainian officials said the small southern town of Bardiansk had been captured.

Moscow claimed it had “achieved air superiority over the entire territory of Ukraine”, while accusing Ukrainian troops of using civilians as human shields.

“You can’t conquer a country in two days,” said Olivier Kempf, a security analyst at the Foundation for Strategic Research think tank, cautioning against Western optimism about Russia’s slow progress so far.

“There have been difficulties, yes, it is a war. They probably have logistical problems, but whatever anyone says, they are still moving forward,” he told AFP.

The talks on the Belarus-Ukraine border were led by Vladimir Medinsky, Minister of Defense of Ukraine and adviser to the Russian President.

Kyiv was initially reluctant to send a delegation to Belarus, given the country’s role in facilitating Russia’s attack on Ukraine by hosting the troops and weapons used for the invasion.

“We agreed to continue the talks,” Medinsky said at the end of the talks.

The weekend saw a significant series of announcements from Europe, Germany unveiling a historic shift in its defense policies, and the EU saying it would buy and supply arms to Ukraine, a first such move in its history.

New sanctions on Russia’s economy, announced over the weekend, are aimed at cutting it off the global financial system in a way that cuts Iran, Venezuela or North Korea out of international trade.

The Moscow stock market remained closed on Monday to prevent a massive sell-off.

Many Russian banks have been excluded from the SWIFT bank system, which is used to settle international trade, and the Russian central bank has seen its foreign assets frozen in Western countries.

FIFA and UEFA said it was also receiving backlash from the sports world, as Russia was expelled from the World Cup and the country’s clubs and national teams were suspended from all international football competitions “until further notice”. .