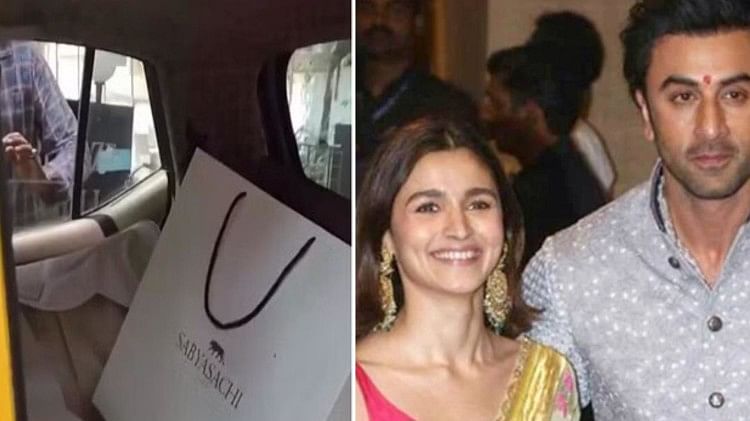 The wedding preparations of Ranbir Kapoor and Alia Bhatt are going on in full swing. Although no official statement has come out from the family of both of them about this marriage, but various updates are being seen on social media regarding the marriage. According to the latest information, the wedding clothes of both of them have reached the venue.

Video went viral on social media
The video of Ranbir and Alia’s wedding clothes is becoming increasingly viral on social media. Actually, there is a gathering of paparazzi at the alleged venue of the wedding, Krishnaraj Bungalow. Paparazzi is bringing the information related to marriage to the people from moment to moment. Meanwhile, a video surfaced on social media, which is outside Ranbir Kapoor’s house. In the video, clothes designed by famous designer Sabyasachi Mukherjee are seen. It is being told that these clothes belong to Ranbir and Alia.

According to media reports, Alia Bhatt will take seven rounds with Ranbir Kapoor in a pink lehenga designed by Sabyasachi. At the same time, in other functions of the wedding, she will be seen in designer clothes of famous designer Manish Malhotra. According to the information, both of them will be married on a pastel theme.

Let us tell you that recently Alia’s uncle Robin Bhatt had confirmed that Ranbir and Alia will get married on April 14. Robin also said that a mehendi ceremony is scheduled the day before. Meanwhile, preparations for the wedding are going on in the house, where the decorators have arrived on Monday. Before the wedding, RK Studios of the Kapoor family was also decorated with lights. Significantly, Alia and Ranbir will soon be seen in Ayan Mukerji’s film Brahmastra. Recently a motion poster of this film was released which was well received by the people.

Here are the little things that made their union really special