Home Bollywood News Rakhi Sawant faces an OOPS moment as she slips down her skirt... 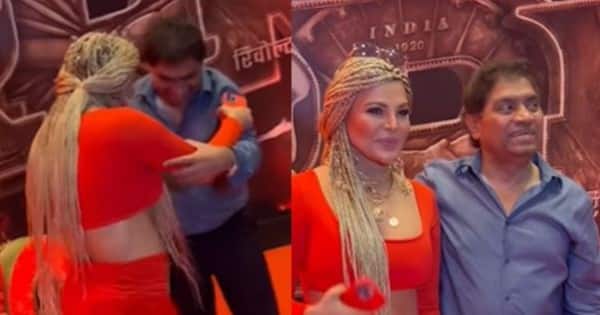 On Wednesday, the team of RRR celebrated the film’s Rs 1000 crore milestone at the box office and hosted a grand party in Mumbai. Aamir Khan, Ayan Mukerji, Makarand Deshpande, Huma Qureshi, Karan Johar and others attended the party. Rakhi Sawant made her presence felt along with Aamir, Karan, Ayaan and Johnny Lever. The actress wore a red long-sleeved crop top paired with a body-fitting thigh-high slit skirt. She completed her look with a blonde wig paired with dreadlocks and sunglasses. Also Read – Kareena Kapoor Khan to Shamita Shetty: Actresses who got trolled for their ‘attitude’ problem

A video of Rakhi’s oops moment went viral on social media, in which the actress was seen constantly pulling her skirt down. The actress was seen holding the skirt to reduce the gap between the slit and the thighs. Also Read – Pushpa 2, Aadipurush and more: Here are the latest exciting updates about the most awaited South legends

Pregnant Kritika Sengar showed off her baby bump in a ruffled...

Libra Vs Pisces: Know How Ranbir Kapoor And Alia Bhatt Will...