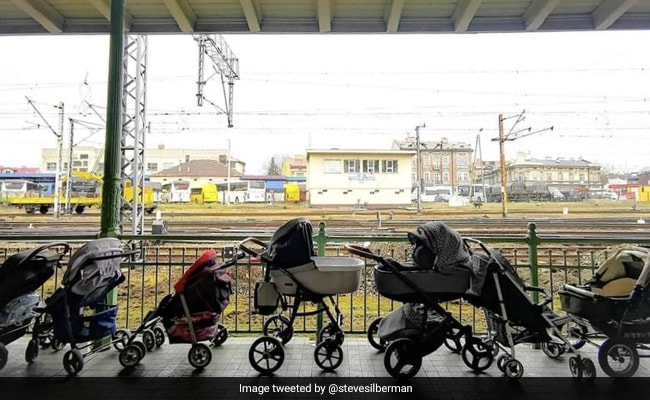 The original photo was taken on March 3 at Przemysl train station in Poland, barely eight miles from the border with Ukraine

Amid the Russian invasion of Ukraine, humanity and acts of kindness are offering hope. There are many examples who have done everything possible to help the Ukrainians forced to flee their country. A similar story has emerged from Poland, where some women left empty strollers at a train station to help Ukrainian parents. For the past few days, a picture of strollers is going viral.

Writer Steve Silberman shared the picture with the caption, “So beautiful: Polish moms leave empty strollers with their babies at the train station for Ukrainian moms who survived the war.”

Pretty: Polish moms leave empty strollers with their babies at the train station for Ukrainian moms who survived the war. [via @cyndipzsanchez] #standwithUkrainepic.twitter.com/E33EAt6Jx

Francesco Malavolta took the original picture on March 3 at Przemysl train station in Poland, barely eight miles from the border with Ukraine.

As a result of the Russo-Ukraine conflict, millions of Ukrainian refugees have been forced to seek refuge in neighboring countries, most of whom have emigrated to Poland.

Because of the Ukrainian government’s ban on leaving the country for men aged 18 to 60, mothers and daughters are separated from their fathers, brothers and other family members.

Most of the reports coming from Ukraine have been frightening and devastating. The pictures and videos of the incidents unfolding there are devastating. In such a scenario, such acts of humanity for Ukrainian refugees are moving to say the least.

War broke out, but Russia is still paying Ukraine for this...

Some Syrian ex-soldiers ready for battle in Ukraine, say commanders