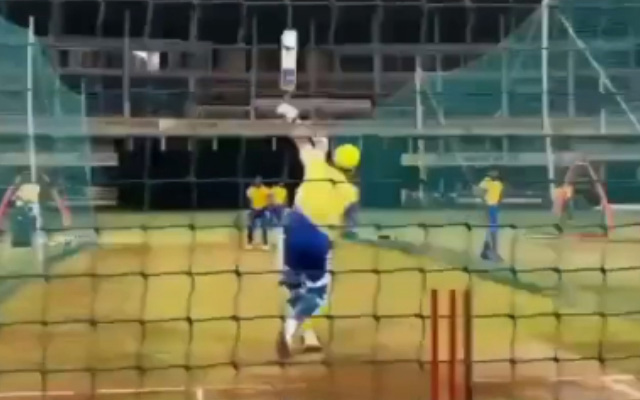 The 2022 edition of the Indian Premier League (IPL) will begin on 26 March 2022, and the tournament’s opening match will be played between last year’s finalists, Chennai Super Kings (CSK) and Kolkata Knight Riders (KKR).

And, ahead of the tournament, the CSK captain Mahendra Singh Dhoni He was seen hitting some big shots in the nets. In fact, in a video released on social media, the CSK stalwart is seen hitting 3 big shots, in the third shot the one-handed shot went too long.

With only 17 days left for the start of the Indian T20 League, CSK players have started their practice ahead of their first season against KKR.

fans gave Chennai Super Kings’ A warm welcome to the players in Surat. Fans were seen standing next to the bus that brought CSK players in large numbers to catch a glimpse of their favorite cricketers. The post from the official Instagram handle of Chennai Super Kings read, ‘Make some noise for the boys of Chennai’ as the team arrived in the city.

Chennai Super Kings (CSK) emerged as the champions of the 2021 edition of the IPL. The MS Dhoni-led side put up a stellar performance in the tournament after beating Kolkata Knight Riders (KKR) by 27 runs in the summit clash and winning the IPL title.

Chennai Super Kings (CSK) is one of the most successful franchises in the history of the Indian Premier League (IPL). The MS Dhoni-led outfit has won the IPL title on four occasions, and only Rohit Sharma-led Mumbai Indians (MI) have won the IPL title on one more occasion (five) than CSK. CSK have also qualified for the IPL summit clash on nine occasions.

Big names who have failed so far in IPL 2022

‘The difference between a good effort and a good catch’ –...