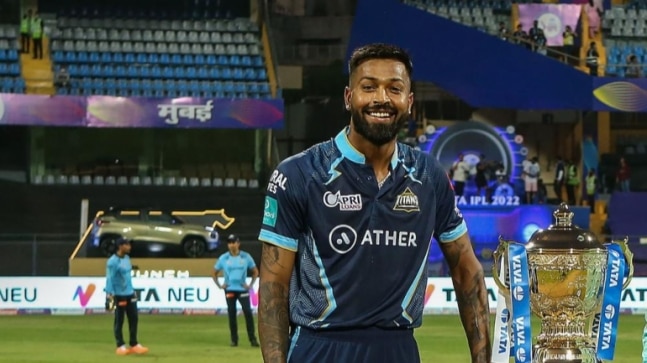 Former England off-spinner Graeme Swann has lavished praise on Hardik Pandya, the newly-appointed Gujarat Titans captain, saying the India all-rounder has the aura to be a leader of his men. Swann’s comments came after Gujarat outclassed Delhi Capitals on Saturday to begin their IPL 2022 campaign with 2 successive victories.

Hardik Pandya, who was released by Mumbai Indians, was signed by Gujarat Titans as their draft player for Rs 15 crore. The CVC Capital-owned franchise appointed Hardik as their captain despite doubts over his fitness.

However, Hardik has come out all guns blazing with both bat and ball and has led Gujarat well so far in IPL 2022. On Saturday, he hi a quickfire 31 before bowling his full quota of 4 overs, conceding only 22 runs and picking up the crucial wicket of Delhi opener Tim Seifert.

Delhi Capitals failed to chase 171, losing their match by 14 runs. Hardik was proactive on the field with his bowling changes as he used up his key bowlers Rashid Khan, Lockie Ferguson and Mohammed Shami inside 17 overs. He bowled the 18th and the 20th over while Rahul Tewatia bowled the 19th but Delhi were undone by the 17th over as they had lost 7 wickers for 134.

Ferguson repaid the faith Hardik showed in him by delivering his best IPL figures of 4/28.

“He is like a kid who has been made captain of a U-15 team. Boy! Isn’t he doing it well, I was very, very impressed with his captaincy. He has got an aura and personality, he owns himself to leading other men. He looks calm, he always looks calculated,” Swann told Star Sports.

Hardik had not bowled regularly over the last 2 years due to recurring back injury issues. The all-rounder hasn’t played for India since the T20 World Cup last year but he seems to have achieved peak fitness, having worked hard in the lead up to the IPL.

Hardik bowled his full quota of 4 overs in their wins over Lucknow Super Giants and Delhi Capitals and was consistently clocking in excess of 135 kph.

“His bowling itself is good. We are never allowed to ask about his bowling and he has put all the talks about his fitness to rest. He has worked hard on his fitness, he has gotten back to a 100 percent. He was bowling quick .

“He was very, very impressive. He is one of the main reasons why Gujarat have put 2 wins already.”

Hardik-led Gujarat will be looking to complete a hat-trick of wins when they face Punjab Kings after a 5-day break on Friday.