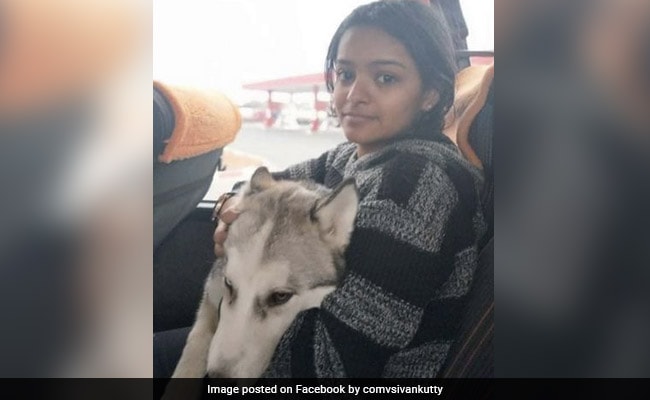 The Ukraine-Russia war has put many pet owners in peril.

Arya, the girl seen in the picture with her dog, hails from Vandiperiyar in Idukki district of Kerala.

An Indian student trapped in Ukraine managed to escape the country with her pet dog as missiles rained down on Ukraine after the Russian invasion.

In a picture being shared on social media, Arya Aldrin is seen holding a Siberian husky in her arms and smiling softly for the camera. “Arya also saved his dog from the war and brought the dog with him to Kerala,” the caption read.

Arya also saved his dog from the war and brought the dog with him to Kerala.#UkraineRussia warpic.twitter.com/DVTvSDnkS0

The President of Ukraine did not run away, leaving behind his citizens. She also didn’t run away leaving her dog alone in the battle field????♥️

One user wrote, ‘This is very touching. May God rest such kind souls in peace.”

This is very heartwarming!!! May God rest such compassionate souls in peace!

Salute to this lovely child.

Some were concerned about the dog’s ability to adjust to tropical climates.

Hope the dog adapts to our climate

It’s a hoarse one. Not suited to our climate 🙁 Hope that fixes.

According to reports, Arya is a student at the National Pirogov Memorial Medical University in Vinnitsa, Ukraine. Kerala Education Minister V Shivankutty posted a message on social media confirming that she hails from Vandiperiyar in Kerala’s Idukki district.

“Arya, a native of Vandiperiyar, returned to Indian soil from the battlefield without leaving her pet dog. The world wants growth through love,” he wrote in a Facebook post in Malayalam.

Earlier, Rishabh Kaushik, a third year engineering student stranded in Ukraine, had appealed to Ukraine for help to save his pet. Mr. Kaushik had refused to leave the country without his pet dog.

Russia launched a full-scale invasion of Ukraine on Thursday. Many Indian students are stranded in the eastern parts of Ukraine, which has been hit hardest by Russian military aggression.

On Monday, the government said that out of an estimated 20,000 Indian nationals present in Ukraine, around 8,000 have left the country since its first consultation earlier this month.

Russia says "remarkable progress" After the conflict talks with Ukraine

No "direct danger" But…: Ukraine’s invasion pushes Sweden’s defense amid