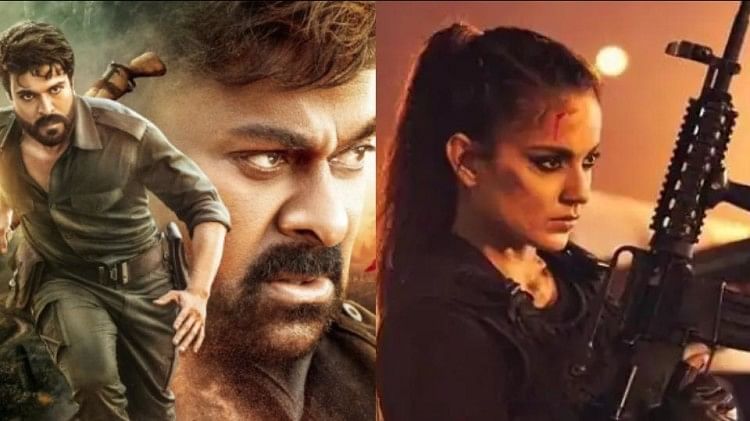 South film industry’s films are rocking the box office. After ‘Pushpa The Rise’ and ‘RRR’, ‘Beast’ and ‘KGF Chapter 2’ are all set to release in theatres. In the midst of all this, now the fans of South Cinema are also waiting for the release of the upcoming film ‘Acharya’, whose trailer has now come to the fore. Ramcharan and Chiranjeevi starrer will see explosive action in this film, whose glimpse has been seen by the fans in the teaser of the film, but the trailer has taken the level of this action a notch higher.

The release date of Kangana Ranaut’s most awaited film ‘Dhaakad’, coming in the year 2022, has been changed. Now this film will come on May 20 instead of releasing in theaters on May 27. Let us tell you that the teaser of Bollywood Queen Kangana Ranaut’s film ‘Dhaakad’ has also been released today. The first look depicting the grandeur of the film has been released in the teaser released on Tuesday. Kangana Ranaut is seen in seven different avatars in this action-packed film.

Dhaakad: Now Kangana Ranaut’s film will not come on May 27, the release date of ‘Dhaakad’ changed

After ‘Kabir Singh’, the fans of Shahid Kapoor’s film ‘Jersey’ were eagerly waiting. The film was also slated for release on April 14. But three days ago, the release date of the film was extended by a week. Now the film will hit the theaters on April 22. In such a situation, speculations are being made about what could be the reasons for increasing the release date of the film. Yash starrer ‘KGF Chapter 2’ was also scheduled to release along with Jersey on 14 April. At the same time, there was going to be a clash between the three films due to ‘Beast’ being released on April 13. In such a situation, it was being speculated that the makers of Jersey have not extended the release date due to fear of a collision at the box office.

Jersey: Makers of ‘Jersey’ caught in legal trouble before release, ‘Beast’ and ‘KGF 2’ do not have reason to extend release date

After the tremendous success of The Kashmir Files, actor Anupam Kher will soon be seen in Sooraj Barjatya’s Uthai. He shared a video from the sets of the film on Tuesday. While sharing the video, he has remembered the old days. He told that when he was doing his first film Saaransh, Sooraj used to work as an assistant and clap boy on the sets. In the clip shared by Anupam, he is seen holding a clapper board of height.

Bollywood: Big disclosure of Anupam Kher, Sooraj Barjatya used to do this work before becoming a film director

As the wedding day of famous film industry’s famous actress Alia Bhatt and actor Ranbir Kapoor is getting closer, the discussions are also getting intense about it. For the past several days, various types of news and reports are coming out about this secret marriage of the couple. The situation regarding the wedding date of Ranbir and Alia, who tied the knot this week, is yet to be clarified, but still the decoration of Ranbir Kapoor’s ancestral house in Mumbai is enough to tell that soon this house will be there. Some auspicious work is going to happen in me.

Has SS Rajamouli become a prisoner of his own mega-budget, blockbuster...