On Tuesday, Sidharth Shukla’s family issued a statement for the late actor, requesting everyone to consult with them before using the late actor’s name in projects. The statement was shared by Sidharth Shukla’s close friend and actor Shehnaaz Gill. “We, as a family, come with a request, which we hope everyone will respect. Sidharth has moved on and no longer can he make decisions for himself, but he’s still an integral part of our lives and our memories and we are there to protect his wishes. We request everyone who wants to use Sidharth’s name and/or face in any project, please reach out to us. Please take a moment to ask us,” read the statement. The family also urged for “love” and “respect” for the late actor.

“We knew Sidharth’s choices, we knew what he would have wanted and our decisions for him would be keeping all this in mind. And if there were projects that he wasn’t happy with, we are sure he wouldn’t want them released. Anything that did not release when he was with us, did not have his consent or intent for release,” continued the statement. The family also urged fans to keep the actor’s wishes in mind: “So please let’s keep his wishes in mind and let’s remember him with love, with respect, with fond memories, the ones he left us with,” the statement concluded. 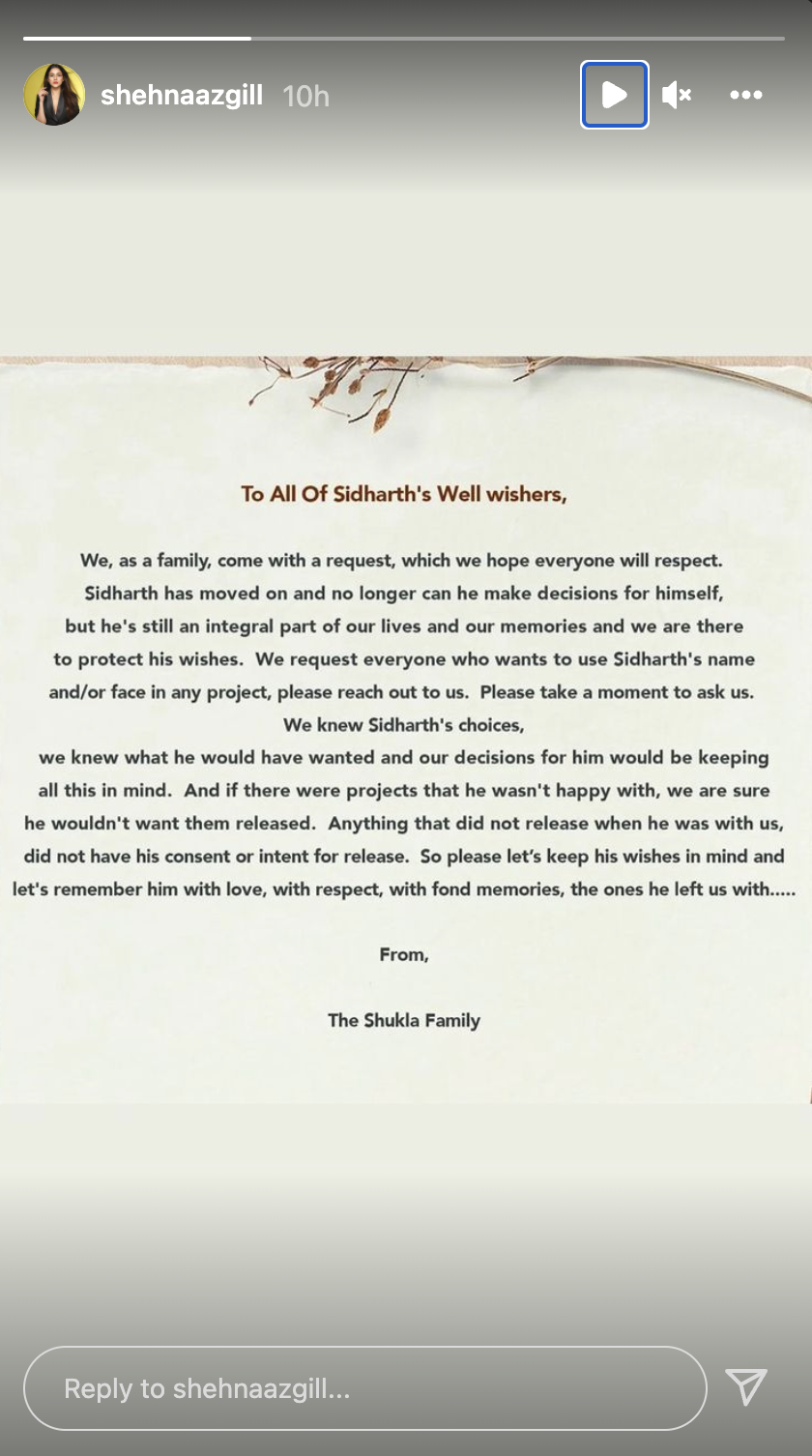 Sidharth Shukla died on September 2, 2021 due to a heart attack. The late actor made his appearance in the popular daily soap Balika Vadhu: Kacchi Umar Ke Pakke Rishte. The late actor also featured in the TV show Dil Se Dil Tak alongside Rashami Desai. Sidharth participated in TV reality shows such as Fear Factor: Khatron Ke Khiladi 7 other Jhalak Dikhhla Jaa 6. He also featured in Shashank Khaitan’s directorial Humpty Sharma Ki Dulhania opposite Alia Bhatt and Varun Dhawan. He was also seen in several music videos, two of which were with his friend and fellow Bigg Boss 13contestant Shehnaaz Gill.

On the professional front, Shehnaaz Gill featured in several Punjabi music videos and films such asKala Shah Kala other daaka. The actress featured in a music video with rapper Badhshah. Shehnaaz was last seen in a Punjabi film,Honsla Rakhalong with Diljit Dosanjh and Sonam Bajwa. When Shilpa Shetty and Shehnaaz Gill make a video together, it...

Shehnaaz Gill and Yashraj Mukhate in a not-so-“boring” video