Anushka Sharma announced her next project on Thursday. The Netflix movie called Chakda Xpress, based on the life of former Indian captain Jhulan Goswami, stars Anushka Sharma. The film’s teaser immediately started trending and was capitalized by several Bollywood stars. The loudest cheers came from actress Taapsee Pannu, who will play the role of cricketer Mithali Raj in the film Shabaash Mithu. In response to the film’s teaser, the actress wrote, “From Mithali to Jhulan! In a separate Instagram story, Taapsee Pannu wrote: “Time for“ women in blue. ”Let’s go Chakda Express! “ 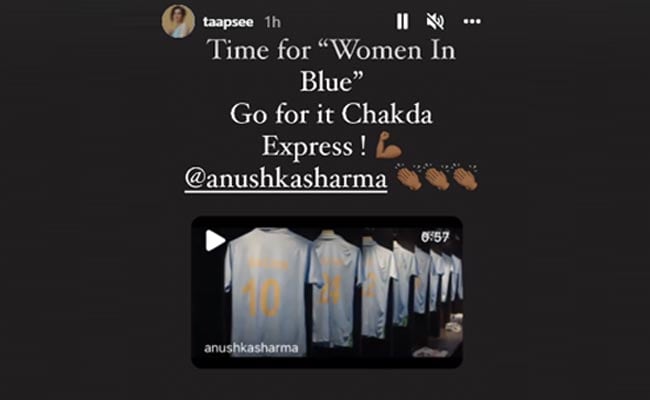 On Thursday, Anushka Sharma announced that she was joining the project Chakda Xpress on Instagram. An excerpt from her post read: “It’s a really special movie because it’s essentially a story of enormous sacrifices. Chakda Xpress is inspired by the life and time of former Indian captain Jhulan Goswami and will be an eye opener into the world of women’s cricket. At a time when Jhulan decided to become a cricketer and make her country proud on the global stage, it was very difficult for women to even think about playing the sport. This film is a dramatic retelling of several incidents that shaped her life and also women’s cricket. “

Meanwhile, Taapsee Pannu can be seen in the film Shabaash Mithu, a biopic about cricketer Mithali Raj. The director is Rahul Dholakia. Taapsee Pannu announced their collaboration with the project on Mithali Raj’s birthday in 2019. She tweeted pictures with the cricketer and wrote, “Happy Birthday Captain Do everything possible to make sure you are proud of what you see on screen Shabaash Mithu. PS_ I’m ready to learn the cover drive. “

Happy birthday captain @ M_Raj03 On this birthday I don’t know what gift I can give you, but this promise that I will give everything to make sure you are proud of what you see of yourself on screen #ShabaashMithu
PS- I am ready to learn THE cover drive pic.twitter.com/a8Ha6BMoFs

Chakda Xpress, directed by Prosit Roy, will begin filming shortly and will appear on Netflix. Anushka Sharma was last seen in the 2018 film zero, with Shah Rukh Khan and Katrina Kaif.