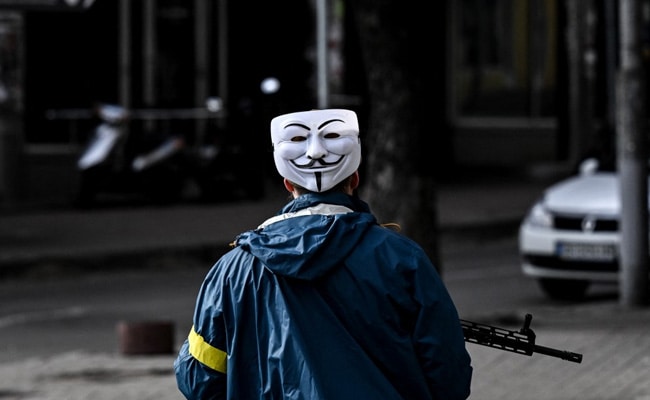 Hacker group Anonymous on Monday claimed responsibility for obstructing the websites of pro-Kremlin Russian media in protest against the invasion of Ukraine.

The group targeted the websites of state news agencies TASS and RIA Novosti, as well as the websites of the newspapers Kommersant and Izvestia and Forbes Russia magazine.

It posted messages urging Russians to try to stop the war and not participate as fighters.

“In a few years we’ll be like North Korea. What’s in it for us? To make history books for Putin? This isn’t our war, end it!”, in a message in Russian posted on Forbes Russia Said place.

“This message will be deleted and some of us will be sacked and even jailed. But we can’t stand it anymore,” signed the author as “Related Journalists of Russia” Said while doing

The latest cyber attacks come after the hacking of the state-funded television channel RT on Thursday.

They also follow the websites of the Kremlin, the Defense Ministry and the Duma, the lower house of parliament, being downed over the weekend, claimed Anonymous on Twitter.

The sites have suffered denial of service (DDoS) attacks.

Web monitoring group Netblox said in a report on Saturday that Russians were facing delays in accessing the websites of the main phone and mobile phone operators, Rostelecom, MTS, Beeline and Megafon.

Ukraine’s Minister of Digital Transformation, Mykhailo Fedorov, said on Saturday that the country needs IT recruiters.

“We are building an IT army. We need digital talent. All operational tasks will be given here,” he tweeted.

In the midst of the Russo-Ukraine War, the US "Concerned" On...

Russian missiles in Ukraine have 60% failure rate, US officials claim

Conspiracy theorists plunge Ukraine into crisis after the dissolution of Kovid