Alia Bhatt joined thousands around the world to pay their respects to legendary Kathak dancer and Guru Pandit Birju Maharaj. The artist par excellence died at his home in Delhi in the early hours of Monday morning. He was 83. Alia Bhatt recalled the icon in a special Instagram Stories post. Set on a stunning black and white image of Pandit Birju Maharaj working his magic, Alia Bhatt wrote a note looking back on the time she was training under the guru for the song Ghar More Pardesiya from her movie Kalank. In her note, she described the three days under his tutelage as one of the “most creative and fulfilling experiences.”

Alia Bhatt’s note reads: “I had the honor and privilege of spending three full days with Pandit Birju Maharaj in 2018 while preparing for it Ghar More Pardesiya. I will never forget what he taught me. It was possibly one of the most creative and fulfilling experiences I’ve ever had. A legend that has inspired many and always will through his art. It really breaks my heart to write this post today. May his soul rest in peace.” 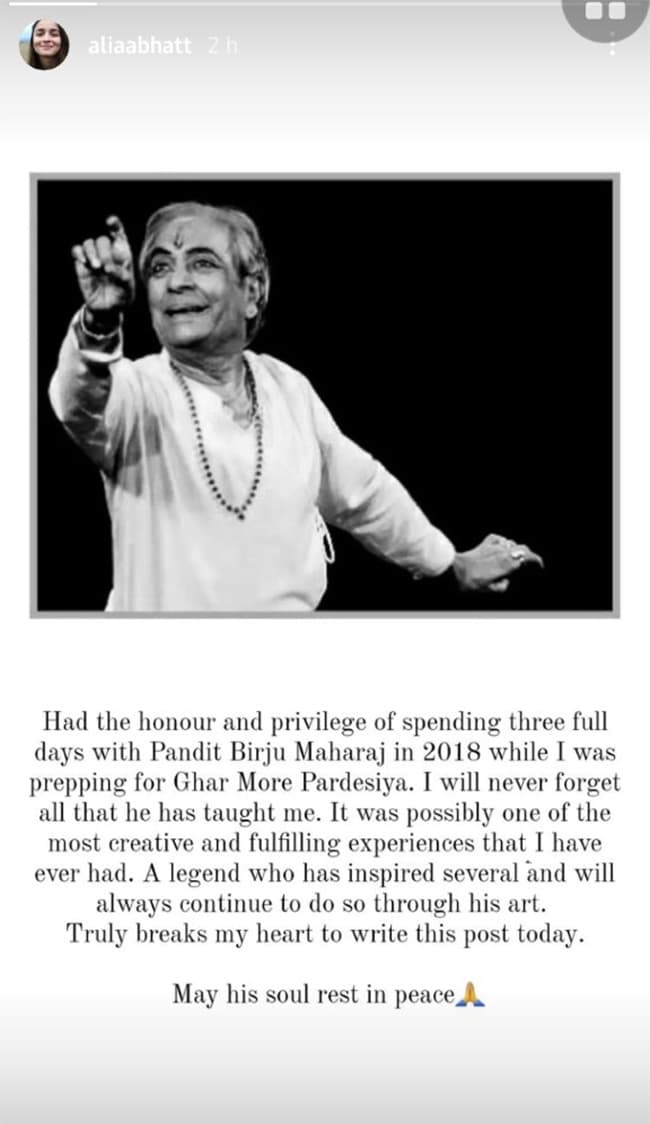 Pandit Birju Maharaj brought his skills in Kathak to the big screen by collaborating with directors like Satyajit Ray and Sanjay Leela Bhansali and actors like Kamal Haasan and Madhuri Dixit.

Pandit Birju Maharaj was not only a Kathak dancer, but also a trained classical singer. He had composed the music, sung and choreographed two dance sequences in the film Satyajit Ray Shatranj ke Khilari. His notable work in films includes choreography for songs such as Kaahe Chhed Mohe and Mohe Rang Do Laal, among other. He also won the National Film Award for Best Choreography for Unnai Kaanaathu.

A descendant of the Maharaj family of Kathak dancers, Pandit Birju Maharaj trained under his father, Guru Acchan Maharaj. For his remarkable contribution to the arts, he was awarded the second highest civilian honor, Padma Vibhushan, in 1986.

To the newlywed Mouni Roy, with love from Brahmastra co-star Alia...

When will Alia Bhatt work with Allu Arjun? Your family...