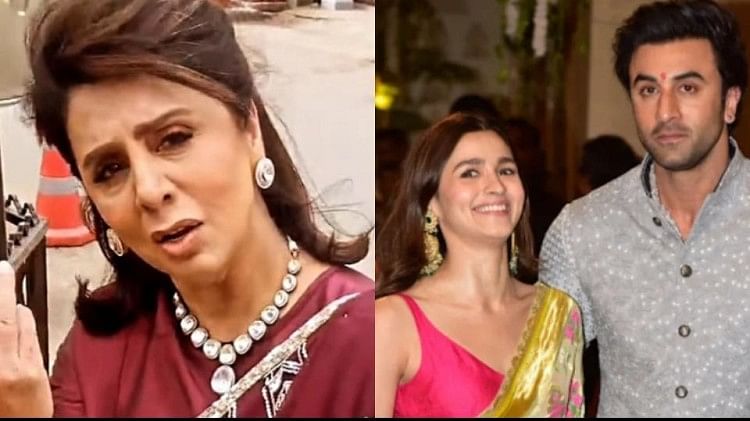 The countdown for Alia Bhatt and Ranbir Kapoor’s wedding has begun. It is claimed that Alia and Ranbir will get married between April 14 and 17 and the preparations for their wedding have also started in the Kapoor family. But in the midst of all these preparations, no one from the family of both is telling the exact date of marriage, due to which paparazzi are repeatedly asking Ranbir Kapoor’s mother Neetu Kapoor for the date of her son’s wedding, to which Neetu Kapoor twisted. Turning around but now Neetu Kapoor was seen raging on the question of paparazzi, whose video is going viral on social media.

Actually, Neetu Kapoor is busy shooting for the reality show ‘Dance Deewane Junior’ amidst the news of her son Ranbir Kapoor and Alia Bhatt’s wedding. Recently he was spotted with Nora Fatehi and Marzi Pestonji during the shoot, whose videos are now going viral. It can be seen in the video that the paparazzi surrounded Neetu Kapoor and then everyone started asking her questions related to Ranbir Kapoor and Alia Bhatt. During this Neetu Kapoor remained silent at first. But then she suddenly said, ‘Don’t ask questions on this at all.’ Hearing this answer of Neetu Kapoor, all the paparazzi present there became calm.

Alia and Ranbir are going to invite close people for their wedding, including some Bollywood stars. The wedding guest list of both includes Bollywood celebrities like Karan Johar, Shah Rukh Khan, Sanjay Leela Bhansali, Akanksha Ranjan, Anushka Ranjan, Rohit Dhawan, Varun Dhawan, Zoya Akhtar and many more. On the other hand, earlier it was being said that Alia and Ranbir will not go on honeymoon after marriage. But now information has come out that both will go to South Africa for their honeymoon.

Dance Deewane Juniors: Neetu Kapoor gets into wedding spirit ahead of...

Ranbir Alia Wedding: Why April 13 is special for Alia-Ranbir? ...